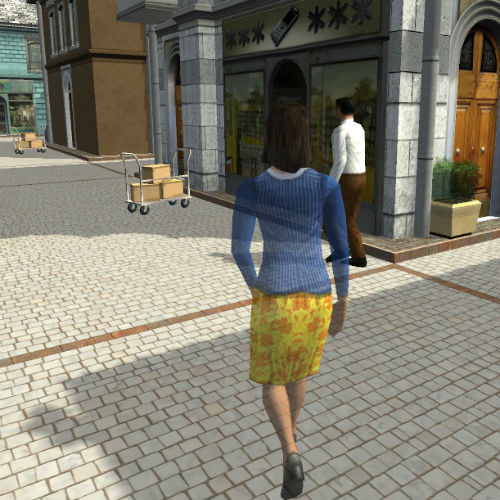 A scene from City Quest, a brain training game

Playing a video game could turn back the hands of time, making your brain feel younger. That’s the goal of European scientists, who designed a fun game called City Quest. In this game you are challenged to find your way through an unknown city; the virtual “you” moves along as you shift your weight on a balance board.

You avoid obstacles in a race against the clock to reach your destination. But playing the game may gain you unexpected rewards.

We are building a fun game for people, but we are also training the brain to better process information from the senses, says psychologist Prof Fiona Newell from Trinity College Dublin, Ireland. “As a consequence their brain will be younger.” This is part of a research project called VERVE.

As you walk through the virtual town or city in City Quest, you see and hear things and think about where you are. As in a real city, your brain must constantly update your position and gel together new information from your senses. Prof Newell explains that as we get older our brain’s ability to process all this information dulls a little, as the chat between the different sensory areas of our brain becomes a little muffled.

The idea of City Quest is to revive this ability in older people, making the brain chat clearer. Manoeuvring in the virtual city could also restore confidence in those who have a fear of falling. “We want to see if this game can improve perceptual ability and allow you better navigate an unknown environment and avoid obstacles,” says Prof Newell, who believes it could help those with Parkinson’s disease and others concerned about falling.

The 60 adults who signed up to play this game will hopefully not just become champions at playing City Quest. They will be tested to see if they perform better on other tasks after 10 game play sessions. Navigation and cognitive abilities should get a lift. And scientists will scan images of the brain to see if the game changes how their brain is wired afterwards.

Prof Newell hopes VERVE can also discover tell-tale signs in the brains of people at risk of falling and take measures to try prevent this from happening; perhaps by playing a navigation game.

Once an older person has fallen, it can restrict their lifestyle, lead to isolation, and leave them at greater risk of cognitive decline; therefore, spotting and helping someone at risk of falling could ultimately reduce their risk of memory impairment.

City Quest was designed by a game company in Italy called TESTALUNA which offers commercial games like “Hot Rod Racers.” City Quest could see you navigate your way through various cities, changing the level of difficulty, and allowing you to prepare for a trip or enjoy a virtual walk through Dublin, Paris or Rome. “This will not be a boring psychological task. Fun is key. Players have to enjoy it. There is a competitive element to it. You want to get to the next level,” Prof Newell explains.

“We are hoping to build a good game that older people can use in their home and become more confident about navigating and therefore get out and about more.” It has been shown that a lack of mobility among seniors can impair some of their abilities such as spatial navigation.