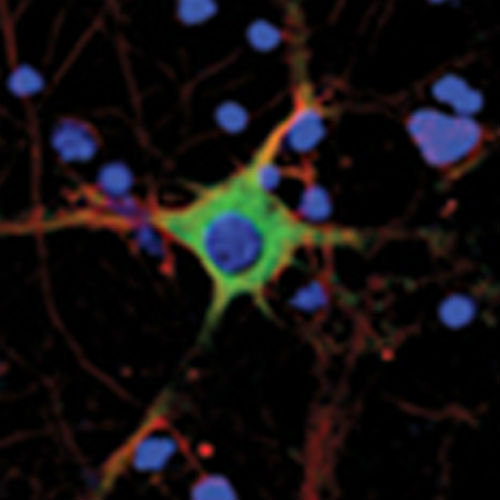 The HDAC6 protein in mouse neurons

The brains of Alzheimer’s disease patients show a tangled mess of jumbled proteins, but this is the last stage of the disease. Things go off track many years before this and scientists believe that its early signs can be read from our DNA.

Rather than treat the mess of jumbled proteins, researchers are looking now at a new strategy. Might it be possible for a drug to reverse the changes in our DNA that result from Alzheimer’s disease? This was the goal of a European research project called “EPITHERAPY,” which explored the potential of epigenetics.

It is not only the DNA sequence that is important, but which parts are readable for making new proteins. Slight modifications – epigenetic changes – can alter readability; they are powerful, since they can turn genes on and off.  For example, this is what makes a Queen bee live for years while her smaller worker bee sisters live for months.

“Our genome is a library and cells read different parts of that library depending on whether they are brain cells or liver cells,” explains Professor Andre Fischer of the German Center for Neurodegenerative Diseases and the University Medical Centre in Goettingen, Germany. “What tells them which chapters to open is the epigenome. You can think of epigenetic mechanisms as placing bookmarks in your genome and directing cells to read some parts and ignore other parts.”

Only recently have scientists begun to understand how these bookmarks are placed in our genome; these bookmarks change dramatically with Alzheimer’s disease. Prof Fischer and fellow scientists in EPITHERAPY wanted to see if changing the bookmarks with drugs might offer a way to turn back Alzheimer’s pathology. Bookmarking involves special proteins that tweak our DNA to make it more or less readable – this changes which genes are read and which are ignored by cells.

Prof Fischer found that reducing the levels of one of these special proteins, in the brains of mice with the features of Alzheimer’s disease, improved their memory. It seems that this freed up another important protein that helps to move cell machines like mitochondria, tiny power factories, to where they are needed. This might work in people too.

“We see that in Alzheimer’s disease but also Huntington’s disease you have impaired intracellular transport in nerve cells, which means that the stuff is not getting from A to B as needed as the streets are blocked with garbage,” Fischer explains. “When you inhibit the bookmarker protein, called HDAC6, you “are getting rid of the garbage from the street and the street is free again.” The junctions between nerve cells need energy and must be able to call upon mitochondria for power.

Prof Fischer and his team now plan to test the benefits of a drug already used to treat cancer that has been shown to block this bookmarker protein, HDAC6.

“What we know now is that using epigenetic therapy has beneficial effects on very different brain diseases such as Alzheimer’s disease, Huntington’s disease and schizophrenia,” says Fischer.

But by erasing that disease signature from our DNA, these drugs could give us a fighting chance before the classic signs of Alzheimer’s such as memory loss appear.