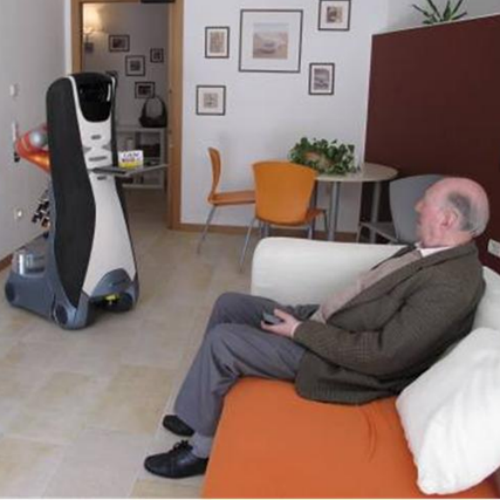 Robot at home in Stuttgart

“Shadow” arrived in his new home in Stuttgart, Germany, with a clear mission. To help two elderly residents aged over 80. Elderly people usually wish to live at home for as long as possible, and the Shadow Robotic System, or SRS for short, can assist.

The Stuttgart flat was all new to this care robot and more difficult than the trials he had done back in the lab. But the Care-O-bot learnt how to support the two seniors as part of a European research project. Their electronic butler could remind them about taking medications, assist them by fetching a drink but also provide a link to a carer or relative.

This is because this robot has a special ability. He can follow commands sent to him by remote control; the idea is for adult children or carers to assist the senior person remotely by using this robotic system. In the Stuttgart test, an Apple ipad and smartphone could be used to tell the Shadow Robotic System what to do.

The seniors themselves could also control the robot and there was a tech expert on-hand to help the robot if an unexpected situation stands in his way. “This is about family members and the robot working together to provide independent living for older persons,” explains Renxi Qiu, robotics expert at the University of Bedfordshire and Shadow Robotic System scientist.

Most elderly people who’ve experienced this robotic system at home thought “he was very cool, a nice gadget,” says Qiu. “They like to interact with the robot and would fancy such a system in their own home.” Qiu’s parents live in China and it is his goal one day to be able to help them remotely using a care robot.

Qiu and project partners from around Europe also worked on the robot’s software to allow him learn from his experience. This allows him perform unpredictable tasks, making him very different from his repetitive robot cousins working on factory assembly lines.

The idea is not to turn the robot into a servant, however. Although possible, this robot will not be making tea or cooking for senior people. This would add to cost, and most seniors like doing these things for themselves as part of their daily activities.

“We don’t want to replace older people and have the robot do everything for them. Just remind them about things, help encourage them in certain situations and fetch items if this is really necessary,” Qiu explains. The robot itself would not be mistaken for a person and is clearly a machine, a high-tech gadget to make living on your own easier.

For now the cost of this robot is too high to roll him out to everyone who desires robot care. Qiu and other experts are working on knocking down the cost from around quarter of a million euro today to a few thousand euro. That would make robots popular. “A family member could drive Shadow around the house if they could not get a reply from an older person,” says Qiu, adding that security and safety would be critical parts of the robot’s mission.

SRS stands for “Multi-role Shadow Robotic System for Independent Living.” It is hoped that the robot could help seniors stay safe but also socially engaged with family members and travel more outside the home, but with SRS at their side. It is known that more social engagement is healthy for brain function, so SRS can assist mind and body.