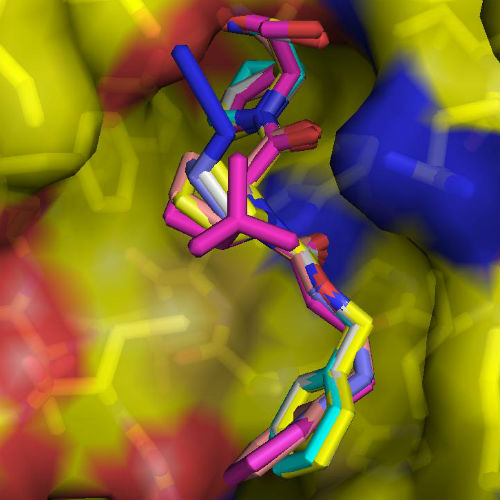 The electrostatic surface of PREP

Our body makes and breaks proteins every second of every day in our brain. If this internal conveyor belt breaks down, it can result in an unhealthy build-up or even a lack of essential proteins.

Specialised proteins called enzymes lend a hand when it comes to manufacturing new proteins or chopping up unwanted ones. One such enzyme called PREP is known to cut up several types of proteins, hormones and nerve signals in the brain. In recent years scientists discovered that in animals blocking the PREP enzyme had a beneficial influence on memory, learning, and cognition in Alzheimer’s disease and brain injury.

It remained puzzling to scientists what exactly PREP is doing in the brain. Still, they believed that turning the flow of new PREP on full or reducing it to a trickle could help treat some diseases. And in Alzheimer’s it was found that it looked like PREP activity changed. Perhaps restoring this enzyme in the brain would offer a way of treating some brain diseases.

A quest was launched to find ways of blocking – or inhibiting – PREP and to develop drugs against brain diseases including Alzheimer’s. But first what was needed was to know much more about PREP, what it does in the brain and how it goes about its work. Eight groups of scientists from universities across Europe joined with three companies to probe the mysterious role PREP [its full name is prolyl oligopeptidase], played in learning and memory. They also looked for clues to see if inhibitors of PREP could show them how to design a drug.

The project, NEUROPRO, received over 4 million euro in funding from the European Commission. Prof Vilmos Fulop of the University of Warwick in England was part of this effort; he had been the first scientist to map the structure of PREP down to the scale of each atom. “This is an enzyme and we want to design a compound which binds to its active site and which then stops certain reactions. This compound has to be specific and act on only that enzyme,” explains Fulop. And it is important not just to knock out PREP so that it no longer functions. “Everything has a lifetime and we have to find the right balance,” he explains.

The science done by Fulop is basic research; this means he is one of those laying the foundation for the road to a hoped for destination – a successful drug. With enough of the lifting done in laying foundations though, Fulop says it might well be that the “pharmaceutical industry would pick up the research and develop the project further with the aim of coming up with some drugs.”

“The population of the Western world is ageing but we have the money to buy drugs. Drug companies have an interest in this area,” he says. For himself, he says that he is motivated by trying to “do something that is eventually going to be of use to the public and hopefully to be of use in our lives” though he is also driven on by his own curiosity and wanting to solve the puzzle of PREP in our brains.